Rizal in the Modern Day

Mapping Rizal’s maternal DNA: His genetic legacy to the Filipino people: Genetic history is written in our DNA. Each person’s DNA is a product of his parents’ DNA, who in turn, are the products of their own parents’ DNA and so forth. Hence one can trace his own history by mapping specific regions of DNA—DNA that originate from one’s mother (maternal DNA) and those from one’s father (paternal DNA). (Read more) 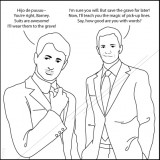 Legendary: Broing Up Rizal: If you’re a fan of the CBS sitcom How I Met Your Mother (HIMYM), you ought to just love this webcomic by Malinaw. In Broing Up Rizal, HIMYM’s resident Casanova Barney Stinson tutors Philippine national hero Jose Rizal on the finer points of being legendary. Though based on real events, it’s a crazy east-meets-west spacetime romp that makes for really hilarious, slightly scandalous, and definitely historically inaccurate reading. (Read more) 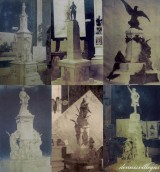 The story of the Rizal Monument: Of all the historical landmarks in the Philippines, the Rizal monument in Luneta easily stands out as the most recognizable and most photographed. It is thus an irony that very few Filipinos know the story behind the building of this important national memorial, and how, more than a century ago, some of the world’s leading sculptors participated in an international contest to design and build it. (Read more)

Jose Rizal: Komikero: In 1884, Dr. Reinhold Rost, editor of Trubner’s Record, a magazine devoted to Eastern literature, asked Jose Rizal to contribute some Asian fables. Rizal was more than delighted to comply and he submitted to Dr. Rost “Two Eastern Fables”. One of the fables was titled “Matsing at Pagong”, which Dr. Rost published in Trubner’s Record issue No. 245 in 1885. (Read more)

The second coming of Jose Rizal: Even though Rizal has been dead for more than a hundred years, he still commands a strong presence in Calamba. In fact, Rizal Day or not, one can hardly pass by Calamba without seeing his posters and statues displayed prominently on buildings and in streets. Rizal is forever enshrined in the hearts of Calambenos. (Read more)

Fashionalism: Real nationalism or a mere trend?: There is no better time to be proud of our heritage than now. Our Filipino craftsmanship has received accolades worldwide, Filipino artists and athletes are gaining their much-deserved recognition, and our eclectic designers-cum-entrepreneurs have turned the world’s spotlight on to Philippine fashion design. (Read more)

Martyr, hero, writer… Hitler’s father, serial killer?: Hero. Martyr. Writer. Get these facts right about Dr. Jose Rizal, and you’d think you already know all there is to know about the Philippines’ national hero. But did you ever hear about him being the father of Adolf Hitler and Mao Zedong? Or about Rizal being the first serial killer in history? (Read more)

Jose Rizal, ‘president’ in mock polls: If Rizal were alive today, he would have been our next president.  National hero Jose Rizal was declared president in a mock elections held simultaneously in different parts of the country by the Commission on Elections last year. (Read more)

Rizal in 2010: Social networking demigod, master of languages (including jejenese): There is a shortage of Filipino role models in these modern times. We are frantically looking for people to emulate because our current leaders are inept and unprincipled. We cannot help but look back to the Filipino heroes of yesteryears, especially our National Hero Dr. Jose P. Rizal!  What if he were alive? What would he be doing? What would be his role in today’s society? (Read more)

Rizal-inspired fashion at PFW S/S 11: All eyes are on the spring and summer collections of 2011 as we usher in the new year. But who stood out in the shows last October? These designers rose above the fray that was unavoidably festooned with undying floral prints and cheery hues. They had vision and the passion to make it real. (Read more)

Some things about Pepe: Pepe had it right from the start. He was born the seventh of eleven children. 7 and 11, the mapamahiin swear, are lucky numbers. (Read more)