If you’re a fan of the CBS sitcom How I Met Your Mother (HIMYM), you ought to just love this webcomic by Malinaw.

As the site’s header says, Broing Up Rizal is “A fistbump to history and HIMYM. True story.”

The webcomic is already on Season 02. Season 01 depicts Barney’s first lessons on being legendary. Jose Rizal learns about suits, the importance of job titles, and getting over Leonor Rivera. 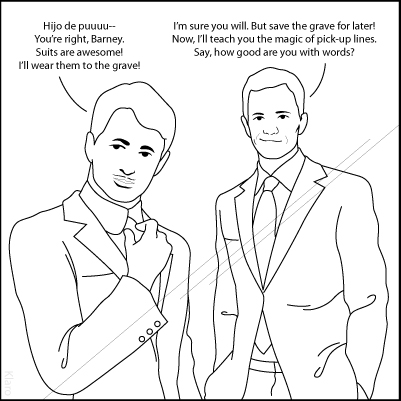 Rizal suits up. | Taken from Broing Up Rizal © Malinaw

From the site’s Aboat (Yes, that’s how it’s spelled) page:

How it Started
Barney Stinson (from the CBS comedy series How I Met Your Mother) and José Rizal had a lot in common: Suits, girls, knowledge of many languages, a large forehead, suits, girls, magic tricks, and suits. And girls. And suits.

Now, what indeed would have happened if they met? I imagined if Barney found himself stuck in the late 19th century, he’d just shrug it off and make the most awesome [sic! - ED.] out of the experience. He’d look for a wingman to score chicks with, and the universe would undoubtedly lead him to Rizal and they’d have legendary adventures together. Like, historical–nay, historic!

Behind the Series
The debate on whether Rizal should be the Philippine national hero or not can go on and on, so let’s not touch that. Let us take note instead that JPR was a man more than an icon. He was a human being who did things; some of ‘em he had to, and some he just wanted to. Some of it he did awesomely, while some could probably end up in a “fail” macro or a demotivational poster. And that’s all right.

We do ourselves an injustice if we only see the people of history as they were depicted in classrooms. They should be accepted as persons instead of flawless beings nobody could realistically relate to. Really, we’d have a better understanding of our history and society if we know more of our heroes’ behind-the-scenes. Consult Cracked.com if you want proof.

And that’s all there is to the series. Less known details of JPR’s life, some bits of what-ifs, and a lot of attempts at humor. Hopefully, Broing Up Rizal can help some college kids with a Rizal subject like PI 100. (But seriously, kids, get your asses into a library and read some Ambeth Ocampo or whatever Rizaliana materials there are. Don’t rely on this series, you lazy brats.) -Malinaw (the artist/writer)