All eyes are on the spring and summer collections of 2011 as we usher in the new year. But who stood out in the shows last October? These designers rose above the fray that was unavoidably festooned with undying floral prints and cheery hues. They had vision and the passion to make it real. Check them out!

Lito Perez may seem to have banked on the patriotism trend of 2010, but he did it with such undeniable flair. Thumbing his nose at the predictable map-and-flag branding that most retail brands have overdone, Perez worked with Filipino-colonial-and-revolutionary-period-inspired prints, silhouettes and colors tailored to his vision. He played mostly with black and brown details against a white-dominated canvas, showcasing vintage illustrations of Filipinos and architecture of the aforementioned time. “Noli Me Tangere” is emblazoned on a white tank top, the title of national hero Jose Rizal’s first novel and a statement in itself. Though Perez featured many pieces reminiscent of the period’s style such as the baro’t saya, most of his clothes are modernized and highly-stylized versions that are wearable. There’s something in it for everyone, be it the dramatic, modern terno, the stylish asymmetrical tops, statement polo shirts or the crisp, formal suits. 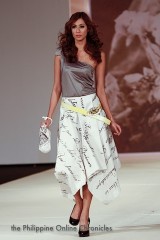 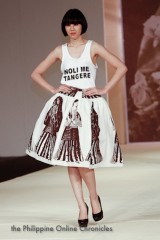 Filipiniana is a strong theme this season, as even Bandoix Flores seems to relish it. Like Perez, Flores chose to look back and work with historical details and a classic palette, but with a definite regal spin to it. His 50s-inspired silhouettes are given a multicultural Filipino flair, with a touch of Chinese and Spanish influence thrown in. Details such as a black abaniko, embroidered veils, damask designs, and the panuelo give the collection a rich backdrop to timeless designs. 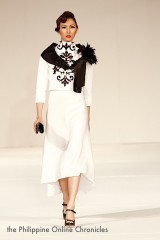 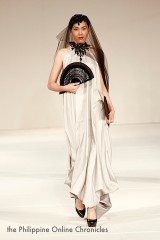 Albert Andrada owes part of the success of his show, entitled Kohinoor, to its elaborate styling. The silvery make-up, heavily-kohled eyes, glittering headpieces and globes of hair complemented the East Asian influences apparent in Andrada’s collection. But more than the bling (and mounds of synthetic goat hair), his collection impressed its audience with show-stopping structures and swathes of fabric in silver, white and gold that merged a decidedly futuristic streak with exotic Indian aesthetics. Though this collection may have been more appropriate to showcase during the holiday season, it has certainly caught our attention and approval. 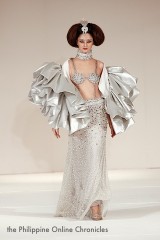 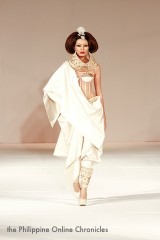 It wouldn’t be a Kermit Tesoro show if it didn’t have industrial pieces and dangerously high heels mixed in with the designer’s signature avant-garde creations, and he certainly did not disappoint. For this summer, Tesoro showcased a collection whose pieces clung tightly to the body, and shaped as if an insect’s skeleton was turned inside-out with flashes of royal blue, cyan and mustard against nude and black, to keep the details even more riveting. Woven rattan pieces were strewn into the equation, complementing the skeletal shapes of the design. 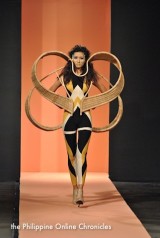 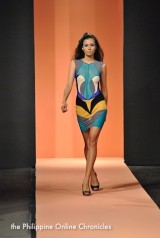 The 70s inspirations are definitely back. You’ve seen them on international runways, and now our very own Philippine Fashion Week S/S 11 pays tribute to the timeless, no-fuss silhouettes the era was known for. Dave Ocampo showcased polished and sophisticated suits as well as various incarnations of the gray pinstripe. Sleek blazers and trousers lent to business-elegance, yet those tailored for women had a playful spin to them in the cut, length and pops of color. We especially loved the grainy charcoal pants on the long-legged women who all made a sexy, powerful and arresting sight. 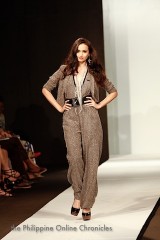 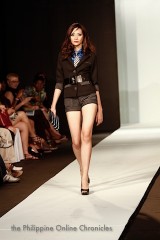 Noel Crisostomo knew how to exude spring and summer cool for his collection this season. His perfect white concoctions practically scream fresh, while his breezy floral frocks in leaf green, sunny yellow and playful pink keep it young. The master of clean, simple lines and silhouettes kept the styling to a minimum, and thus achieved great effect: the focus remained on the simple silhouettes, with models that look bright-eyed and ready for summer. 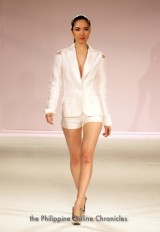 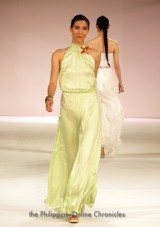 Ronaldo Arnaldo wisely stayed with simple, clean and excellent tailoring for his Spring/Summer collection. His silhouettes are once again an ode to the tailored classics that are chic and functional but with a definitely modern flair. 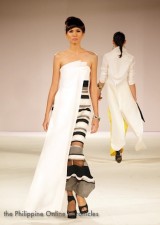 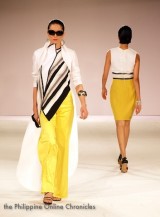 Chris Diaz does feminine and romantic best, but this time around he showed us how cheeky he can also get. With a touch of retro styling, bursts of spring colors and some animal print thrown into the mix, we can’t help but love the dainty dresses, chic resort wear and the lovely gowns. 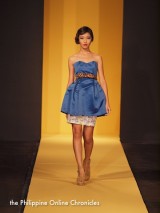 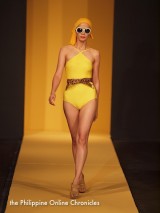