Perhaps the world would not have known the greatness of “Noli Me Tangere” had it not been for the generosity of Jose Rizal’s friend, Maximo Viola, who offered to finance the publication of the Noli, seeing that his friend Jose was undergoing financial challenges at that time. Jose reluctantly agreed to accept Maximo’s offer, provided it be considered a loan rather than a gift. True to his word, Jose Rizal paid the loan in two months, once Paciano was able to wire the funds. The article was written by Maximo Viola’s great-grandson, Ramon Viola.

Dr. Maximo Viola, or Lolo Maximo to us, nationalist, compatriot, and close friend of Dr. Jose Rizal, was born on October 17, 1857 in the town of San Miguel de Mayumo, Bulacan, to Pedro Viola and Isabel Sison. Known as the “savior” of the Noli Me Tangere, which he financed in 1887, Lolo Maximo spent his childhood years in Bulacan and Manila. After studying at San Juan de Letran College and completing a year of medical studies at the University of Santo Tomas, Lolo left the Philippines for Spain in 1882 to pursue a medical degree at the University of Barcelona, which he obtained in 1886.

Lolo first met Rizal in Barcelona in the summer of 1886 while preparing for his final examinations in medicine and surgery. At the time of their meeting, Rizal had just arrived from Madrid and was passing through Barcelona on his way to Paris and Germany, where he was to spend many months in intensive study and writing. (In his January,1913 memoirs entitled “Mis Viajes con el Doctor Jose Rizal” Lolo recounted Rizal’s diligent and systematic approach to the study of the German language, which consisted of habitually committing to memory at least five words of German before retiring each night).

Having completed his medical studies shortly thereafter, Lolo resolved to join Rizal in Berlin, where they were re-united just before Christmas of 1886. Lolo spent the next few months in the company of his “patient” Rizal, who tutored him in the study of the German language. While in Berlin, Rizal maintained a rigorous schedule which, in addition to teaching German, included learning various languages, attending clinics, and participating in numerous conferences on anthropology. It was also during this time that Rizal finished his Noli Me Tangere, a satirical novel which catalogued the evils of monastic rule in the Philippines.

After making the final inscription in his manuscript on the night of February 21, 1887, Rizal spent the next few days with Lolo going from printer to printer to get the best prices. When Lolo offered unconditionally to defray the entire cost of publishing the novel, Rizal refused, insisting that aside from his brother Paciano, Antonio Regidor, his friend in London, and the painter Juan Luna, had also offered to help. After much discussion Rizal relented, “on the strict understanding that (Lolo’s offer of assistance) was a loan and not a gift.” Two thousand copies of the Noli rolled off the press at a cost of three hundred pesos. Among the first copies to be sent out in March 1887 were one to the Governor General of the Philippines and another to the Archbishop of Manila. Cognizant of the fate that awaited him in the Philippines, Lolo attempted to dissuade Rizal from returning home, to no avail. The stage had already been set for Rizal’s eventual homecoming and execution.

Lolo recounted in his memoirs that soon after the Noli was published, Rizal gave him the carefully rolled galley proofs, in the center of which he placed the pen, or one of the pens, he had used to write his magnum opus. The manuscripts were wrapped well in paper and contained an autographed dedication which read: “To my dear friend Maximo Viola, the first who read and appreciated my work – Berlin, 1887 – Jose Rizal”. Unfortunately, by his own account, Lolo lost these priceless souvenirs during the Revolution of 1896, (which, by my father’s account, had been hidden in a kamalig or rice warehouse that the Spaniards torched to the ground).

Having finally completed what he set out to accomplish over two years earlier, Rizal first informed his esteemed friend Dr. Ferdinand Blumentritt that he was planning to leave Berlin for Leitmeritz on April 1 accompanied by his friend Maximo Viola. He explained to Blumentritt that Lolo was also a physician and a fellow reformist. Finally, on May 11, 1887, Rizal and Lolo left Berlin to begin their grand excursion of Europe, stopping by Dresden on their way to Leitmeritz. (A week earlier, on May 4, the German Day of Repentance, Rizal had asked Dr. Blumentritt if he might have the pleasure of meeting him on May 13). He had asked Dr. Blumentritt not to come to the Leitmeritz train station but to simply wait at home. Rizal and Lolo had planned to check into their hotel, freshen up, and then stop by the Blumentritt home afterwards. 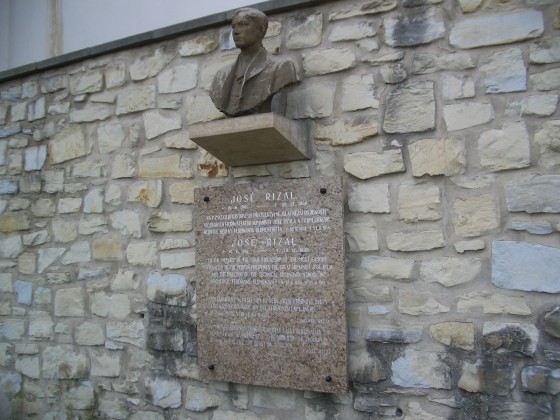 It was not to be – on May 13, 1887, the whole Blumentritt family – Ferdinand, his wife Rosa, and their children Fritz, Dolores (fondly called Loleng), and Konrad – gathered at the train platform to welcome Rizal and Lolo at 1:30 in the afternoon. They accompanied Rizal and Lolo to the Hotel Krebs, the most elegant hotel in town. After freshening up, they proceeded to Dr. Blumentritt’s home, where a banquet was already waiting to be served. Over the next few days, Rizal and Lolo were astonished by the Filipino specialties served them in the heartland of Bohemian Leitmeritz, which included adobo, lechon, lumpia, pancit, kare kare, and paella.

The two guests were overwhelmed not only by the Blumentritts’ proverbial hospitality but also by the care and attention which their hosts lavished upon them. Every morning after breakfast, Dr. Blumentritt punctually showed up at the hotel to present the program for the day. He took his friends to the museum and to various other places of interest, even introducing them to the leading citizens of the city. In the evening Rizal and Lolo were again feted to a sumptuous banquet in the Blumentritt home. Dinner was followed by conversations which lasted into the wee hours of the morning, in the course of which the audible buzz of Spanish and German sounds mingling together could be heard. It was close to dawn when Dr. Blumentritt took his friends back to the Krebs.

Rizal and Lolo’s visit became something of a news sensation that week as can be gleaned from the pages of the Leitmeritzer Zeitung. The newspaper reported: “Today, two gentlemen from the Philippines, Dr. Jose Rizal and Dr. Maximo Viola, arrived for a visit to Professor Blumentritt. Both belong to the Tagalog branch of the Malayan race, and might be the first ones among their people to step on Leitmeritz soil. Under the able supervision of Professor Blumentritt and Robert Klutschak, they saw places of interest in our city and signed their names in the memorial book of the city after they had been introduced to Mayor Gebhardt. On Saturday evening, the gentlemen attended a board meeting of the Leitmeritz Mountaineering Club. The chairman welcomed the guests who came from afar. Mr. Rizal, who is not only an excellent poet but also an artist, responded in a speech which was as witty as it was thoughtful. It was received with approval by the audience.”

Even newspapers in Prague wrote about the visit to Leitmeritz and called Rizal and Viola “extremely talented and charming gentlemen.” The entries in the guest book were showcased: Rizal wrote he was a native of the city of Calamba; Viola of Bulacan (a province north of Manila). Rizal’s speech at the Mountaineering Club drew particularly keen interest, especially when those present found out he had started learning German just eleven months earlier. Dr. Blumentritt extolled Rizal and said that to extemporize a speech in one’s native language was a tall order, let alone in a foreign language which one had just begun to take up quite recently.

Dr. Blumentritt planned a special surprise for Rizal and Lolo on the night before the eve of their departure from Leitmeritz. He invited his guests to a tavern in Schutzen-Inseln, a postcard-pretty islet filled with centuries-old trees . For his farewell dinner, he treated Rizal and Lolo to traditional Bohemian cuisine instead of the “usual” Filipino fare. To reciprocate Blumentritt’s kindness, Rizal and Lolo insisted that the entire Blumentritt family and some friends join them for dinner at the Hotel Krebs on the night before their departure. 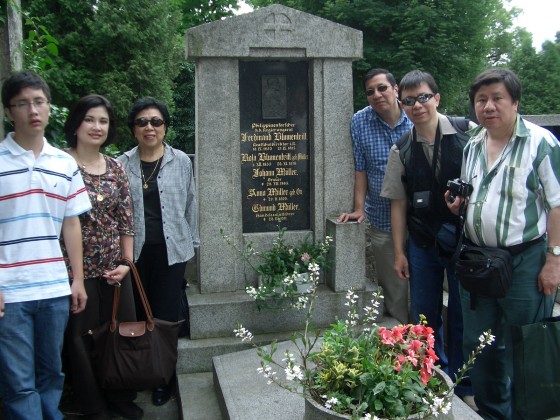 The following morning, the entire Blumentritt family gathered at the train station. It was Tuesday, May 17, 1887. It is said that Rizal handed Blumentritt a pencil portrait that he had hurriedly sketched during a break after one luncheon at the Blumentritt residence . Everyone had tears in their eyes, each one embracing the other silently. And as the train rolled out at 9:45 that morning, little Dolores, who, like a butterfly – Rizal wrote later – ran after the train until it disappeared from view.

Rizal and Lolo journeyed onwards towards Prague. The next few weeks were to take them to the great cities of Europe, among them, Vienna, Salzburg, Munich, and Nuremberg. On June 2, the two friends crossed into Schaffhausen, Switzerland, arriving in Basel the following day. After visiting Bern and Lausanne in the succeeding days, Rizal and Lolo proceeded to Geneva, arriving there on June 14. On the 23rd of June, the pair parted company and went their own separate ways: Lolo returning to Barcelona while Rizal, who had been staying on German soil for 15 months, returned to the Philippines via Naples, the Suez canal, and Singapore.

In December of the same year, Rizal and Lolo were to meet again, this time in the house of one Pedro Serrano of Manila. Lolo also recalled seeing his friend for the last time in June of 1892 at the Hotel de Oriente in Binondo shortly before Rizal’s arrest and exile to Dapitan for political subversion and religious heresy.

Until his death in 1933, Lolo remained a staunch defender of Filipino rights. During the Philippine Revolution of 1896 and the ensuing Philippine-American War, he came to the aid of sick and wounded Filipino freedom fighters in their struggle against colonial domination. When the Filipino-American War broke out, Lolo was imprisoned by the Americans, first at the Malate Military Prison and then at the Olongapo barracks, for his refusal to cooperate with the new administration. Even as a political prisoner, Lolo continued practicing medicine. With his knowledge of tropical medicine and diseases, American doctors, particularly one Dr. Fresnell, recommended his early release on the condition that he treat American soldiers afflicted with illnesses previously unknown in America. His release was subsequently approved by the U.S. military.

Before his death on September 3, 1933, Lolo led an active life, practicing medicine in his home town and conducting medical research on the use of snake venom to produce anti-venom. He became president of La Liga de Propietarios, a large association of rice landowners, served as a municipal councilor, and authored two books on tropical diseases. He was also an avid designer and builder of hardwood furniture, of which many pieces in his collection still survive to this day. He was survived by his wife, the late Dona Juana Roura, and his three sons, now all deceased, namely Jose, Rafael, and Silvio.

My father Raymond Yorston Viola was the eldest son of Rafael, my grandfather. Lolo Rafael married Elizabeth Yorston, a lovely Scottswoman, whom he met while attending university in Glasgow, Scotland, during the dark days of World War I. Together with my grandfather, she settled in his hometown of San Miguel, Bulacan. They had 5 children: Raymond (my father), who grew up in the Viola ancestral home in San Miguel; Irene; Miguel; Rafael, Jr.; and David Viola. Of Rafael’s 5 children, only David is still alive.

My father Raymond married Ofelia Villonco, my mother, on May 4, 1955. The marriage produced 3 children: Maximo (my older brother), myself, and Roberto Villonco Viola (my younger brother).