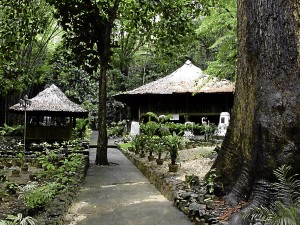 This year is the 115th anniversary of Rizal’s martyrdom at the hands of the Spanish colonizers. This also effectively marks the anniversary of the end of a four-year hiatus which was one of the happier periods of the hero’s tragic life.

Rizal had just returned to the Philippines when, in July of 1892, he was deported to Dapitan, a tiny town on the north coast of Mindanao. He would stay there until August of 1896.

One cannot begin to describe the kind of displacement that such an exile actually meant. Remember that Rizal was a global denizen, a man who had traveled to the great capitals of Europe to imbibe the rich intellectual life of the continent.

This was a man who flourished in the midst of vigorous discussions, who articulated the fate of his people in pioneering novels and vibrant essays. This was a man whose name was on everyone’s lips, who was the center of a nation’s attention. To draw a contemporary parallel with Rizal’s fate would mean marooning, say, one of our senators on a deserted island!

Yet the Son of Calamba took everything in stride. When he learned of the deportation order, he remained calm and composed. One writer attributes this tranquility to the fact that the hero had always believed that “wherever I go I shall always be in the hands of God, in Whose hands are the destinies of men.”

It is said that the news of the banishment resounded throughout the land. Though many newspapers supported the move, one, El Globo, was supposed to have expressed indignation that Rizal could be deported merely for having written against the friars. 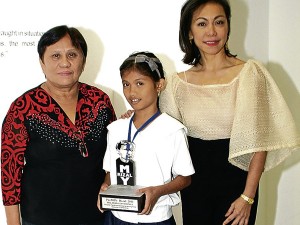 While his case was being discussed in the capital, Rizal was then very far away, physically and spiritually.   He was probably already beginning to plan what he would do in his new home. Perhaps the idea of getting away from it all was not entirely unattractive to the great hero. It can be noted that he had considered pulling out his family from Laguna and founding a new colony in Borneo. He had even invited his dear friend, Ferdinand Blumentritt, to join him there and set up a study center for natural history.

I think that Rizal’s greatness is revealed in the way he dealt with his exile. Instead of languishing and becoming despondent, the hero managed to carve out an amazingly productive life. Today, his place of banishment is a better place because it had once been his retreat.

Rizal continued his medical practice seeing poor and rich patients. One foreigner who had come all the way from Hong Kong for treatment would bring Josephine Bracken as his companion. She and Rizal fell in love, eventually living together in Dapitan as man and wife.

Rizal set up a school for the local boys, many of whom would grow up to occupy important positions in the region. Other projects included the electrification of the town, designs for the retablo of a church in neighboring Dipolog, the creation of a map of Mindanao for the plaza, the gathering of biological specimens as requested by European scientists and the development of a water system. 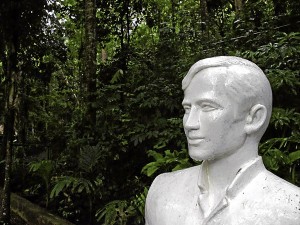 THE HERO of Dapitan

This last enterprise would catch the attention of a schoolgirl more than a century later. For the essay-writing contest ran by the My Rizal team (led by Lisa Bayot and Maite Gallego) as part of the sesquicentennial celebrations this year, Jonalyn Juarez of Cantabaco Elementary School in Toledo City, Cebu, would reveal her dream of becoming an engineer so that she could set up waterworks for her community.

It is almost painful to read how, in the 21st century, the vital liquid that the residents of a city in the Philippines have access to is actually dirty. Yes, it is a tragedy that clean water is still something the youth can only aspire for. Clearly, the contradictions and the social cancers which Rizal had written about are still very much in place.

Society’s problems, however virulent they may be, all seem to recede when one visits Rizal’s former compound in Dapitan, which is now being maintained as a shrine by the National Historical Commission of the Philippines (NHCP). As I walked around, I could not help but notice how green my surroundings were, how lush and alive.

Rizal himself had this to say about his sojourn in this spot:

“I shall tell you how we live here. I have three houses, one square, another hexagonal, and a third octagonal, all of bamboo, wood and nipa… From my house I hear the murmur of a crystal clear brook which comes from the high rocks. I see the seashore… where I have small boats or baroto as they say here… I have many fruit trees, mangoes, lanzones, guayabanos… I rise early—at five—visit my plants, feed my chickens…”

Steps of the valiant

I lingered to examine the stream and the cascades at the base of the hill. I entered the reconstructed house but not before removing my shoes. Though only replicas of the original, the floors still represented surfaces hallowed by the steps of the valiant.

Inside the large nipa hut, I noted that two women from a Rizalista group have taken up positions on the balcony. They were expert hilots offering Philippine-style therapeutic massages to visitors. 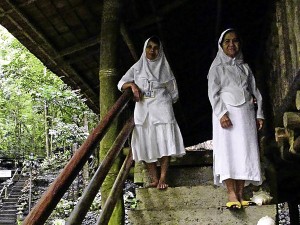 As I looked up at a huge tree that dominates the entire area, I fell to thinking about how this was one living creature which may actually have gazed down on the great man. I touched its gnarled bark: Perhaps Rizal had stopped momentarily here, too, more than a century ago.

I gazed at the sea which surrounds the precinct. Finally I was certain: The vista, the mountains in the distance, the broad marine expanse, these all had been part of our hero’s view as well. What thoughts would have played on that magnificent mind as the day drew to a close?

It almost seems strange to read about this historical giant writing about tending fowl and fruit, spending time to fashion Japanese lanterns to decorate his garden to recall his childhood Christmases in Calamba, looking beneath ferns and stones for a tiny frog. 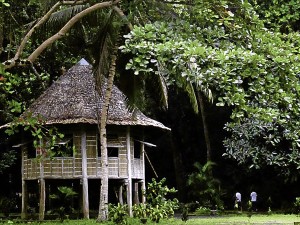 A COPY of the pavilion Rizal Built

Yet all these, too, are part of the message of Dapitan. Unlike Luneta, this was not a place which commemorated death and the cutting short of a glorious career. This was a place that celebrated the pulsing rhythms of a life well lived.

Imagine how much Rizal had already accomplished by the time he was deported to Mindanao. He was truly a universal man, in touch with the pulse of the entire planet. Yet it would be his destiny to suddenly be called to this tiny corner of the earth where he would have to tend to the things that grow, blossom and bear fruit.

Dapitan demonstrates that what made Rizal a hero was not just his game-changing vision, his literary feats, his selfless sacrifice. Equally remarkable is the fact that he had actually served a community, shared in its daily routine and concerns, laughed at its antics and wept at its disappointments.

In Dapitan, Rizal showed us all that the real citizen of the world is she or he who knows how to reach out and touch the very ground on which we all happen to find ourselves.