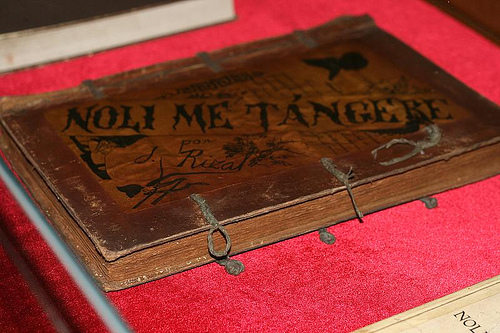 27 December 2011, Washington, DC – The true facsimile of Dr. Jose Rizal’s Noli Me Tangere (actual original manuscript) is currently on display at the Asian Reading Room of the Library of Congress from December 27, 2011 to January 5, 2012. This rare display is being held as a finale to the Library’s commemoration of the sesquicentennial of the birth of the national hero of the Philippines. An exhibit of the works of and about Rizal was held last June, Rizal’s birth month.
Written in Spanish, Noli Me Tangere depicts the injustices experienced by Filipinos during the Spanish colonization of the Philippines. The novel, published in 1887, was followed by its sequel, El Filibusterismo, published in 1891. These novels were smuggled to the Philippines and were known to incite the Philippine revolution against Spain. They were translated in several languages.Also part of the display are transcripts of the Rizal trial, books on Fort Santiago where Rizal was incarcerated and newspaper accounts, mostly from Spain, of Rizal’s execution in Manila on December 30, 1896. Rizal was only thirty-five years old when he was executed. Aside from being an effective writer and author, Rizal was also a medical doctor, an artist, a teacher, a scientist and a linguist. – END