Ms. Diane Sebastian-Auclair teaches the students to act out the story of “Matsing” and “Pagong” 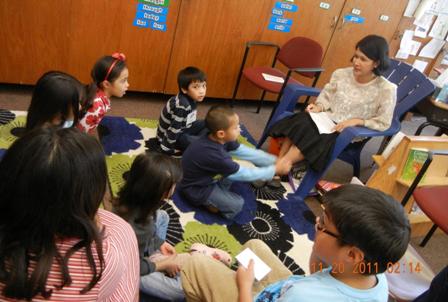 Ms. Anna Bantug-Herrera shows a picture of Jose Rizal as a boy from her lola’s book Indio Bravo

Rizal’s relatives, including Ms. Maricel Lopez-Bretault, granddaughter of Paciano Rizal, are returning to Paaralang Pinoy on January 8, 2012 for another Rizal-themed workshop. In this workshop, the students will visit with Rizal’s relatives, learn Rizal’s poem Sa Aking mga Kababata, act out the Matsing and Pagong story, learn Florante’s song that praises Rizal’s patriotism: Akoy’ Isang Pinoy, and rehearse the Cariñosa dance. The children will also present the above poem, dance, story, and song during their graduation on Sunday, May 6, 2012.

Paaralang Pinoy of Northern Virginia is a volunteer-run, language and culture heritage program for Filipino-American children. The mission of Paaralang Pinoy is to help Filipino-heritage children appreciate Filipino culture and learn Tagalog. Classes are held on most Sunday afternoons from October through May at St. Bernadette Catholic School, Springfield, VA, 22152, USA.  For more information about Paaralang Pinoy, check out our website: http://www.paaralangpinoy.org or email us at paaralang.pinoy@yahoo.com.