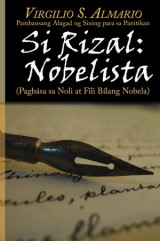 Rizal means absolutely everything to the Filipino. Not only is he the National Hero, he is also the icon, the paragon, the standard, by which every Filipino should measure himself. His contemporaries, most of which are brilliant men in their own right, attest that Rizal was a man who possessed a nearly unparallelled vision of  parallel times. His flair in exposing the political, social, moral and traditional ills of his day is reflective of the greater genius that made him such a legendary figure in his native country. He was a man of many talents; doctor, scientist, philosopher, painter, sculptor, teacher, and last but not least, writer.

There are those who even worship him. Rizalistas, as they are commonly known, portray him as the second coming of Jesus Christ, who could have saved the nation had he lived for a longer period of time. They  believe that Rizal is a reincarnation of some divine deity, who made use of his “mystic” powers of healing and prophecy in a futile attempt to bring redemption to his native land. While most modernist religions would scoff at this notion, the fact that the Rizalistas view Rizal as a miracle worker shows the height of his esteem in their eyes.

Lastly, there are those who consider themselves to be his apostles – those who carry on the task of  passing down his teachings to the Filipino of today. His immortal books, the Noli me Tangere and El Filibusterismo, are still being printed wholesale, with innumerable versions, translations and editions already out in the open. These authors work to bring Rizal back to the lives of his brethren, for patriotism and love of country to continue, as despite having overthrown the yoke of colonialism long ago, every single Filipino can still learn something by emulating his values.

All of these pay tribute to the impact of Rizal’s life, teachings and death in the Philippines. Yet for all his sublime achievements and abilities, questions about his significance in today’s Filipino society– with regard to his writings–remain. Was he a man who desired true independence? What did he actually intend when he wrote this and wrote that? Was he a true patriot by means of the words he wrote? Was he a traitor to his own cause, and do we have any evidence to support this claim?

What Filipinos seem to be forgetting was that Rizal, for all his intents and purposes, was a man who failed in his immediate mission, which was to bring about a peaceful resolution to the issue of colonial despotism. The enemy which exacerbated his time, the Spanish Catholic clergy, proved to be more than too powerful – they were, ultimately, deadly. They succeeded in having him killed in ironic fashion – through a Filipino firing squad. Back then the Roman Catholic faith was used by corrupt friars to extract money, to intimidate the masses, and wield power greater than even the highest civil officials in the land. Yet despite achieving Rizal’s earthly demise, the friars were unable to stem the tide of his ideals. The whole country imploded into armed rebellion nonetheless, and for a time it seemed as though Rizal’s ultimate ambition of a free Philippines with national solidarity was achieved.

In lieu of this, it is today’s society – permeated by Filipinos jaded to their history, as well as authors who aim to strike it rich by exploiting Rizal’s perceived significance – that can be considered the greatest archnemesis of his memory. These are the authors which National Artist for Literature Virgilio S. Almario looks upon with contempt. In his book Si Rizal: Nobelista (Pagbasa sa Noli at Fili Bilang Nobela, he issues a profound, diagnostic response to the errors of contemporary writers in commercializing the translations of Rizal’s twin magnum opuses. He argues that the watered-down incarnations of the works in today’s bookstores are not congruent with the true meaning of Rizal’s works, but rather they are symbolic of the exploitation of the country’s blind devotion to Rizal. In the respectable aim of propagating his greatness, Filipinos are unwittingly killing its true meaning.

For all his talents and fields of expertise, Rizal is perhaps most significant to history as a patriotic writer. While his contributions were probably not as broad as those of other writers from other countries (cliché example: Shakespeare), his two greatest works, the Noli me Tangere and El Filibusterismo,  tower over the precepts of Philippine literary history. Their purpose: to awaken a sense of solidarity, of national consciousness, and to instill a pride in which every Filipino would cherish his origins. Through his now-archetypal characters such as Crisostomo Ibarra/Simoun, Maria Clara, Basilio and Padre Damaso, he sought to open the eyes of every Filipino and Spaniard to the outdated, medieval society of 19th century Philippines, hoping that the more liberal echelons of the colonial government would institute peaceful reforms.

In his book, Almario dealt with many essential questions before he proceeded to his explanations about various misinterpreted, mistranslated and misunderstood identities, events, and themes. He cited a whole treasure trove of past and current authors, most of whom have little or nothing to do with Rizal himself, but everything to do with his readership status: Bakit kailangang basahing muli si Rizal? (Why do we need to read Rizal again?); Ano ang bisa kay Rizal ng Uncle Tom’s Cabin? (What were the effects of Uncle Tom’s Cabin on Rizal?); Realista ba o Romantisista si Rizal? (Was Rizal a Realist or a Romanticist?) All of these serve to shed light on the fascinating truths and deeply-entrenched fallacies about Rizal’s character as a writer.

Strangely enough, our veneration of Rizal has not resulted in a greater understanding of his teachings nor of his role in our history… (I)t has reduced commemoration to meaningless biannual exercises in hagiolatry conducted by prominent cultists sporting glittering uniforms and impressive titles. Words of ritualistic praise uttered on such occasions have done little to deepen our understanding of the historical significance of Rizal’s life, works, and death. Instead, some cultists have focused on trivialities, demonstrating their Rizalist scholarship and devotion by following Rizal’s steps all over the world, searching for traces of every house he live in, every girl he fancied.

He then strives to give a comprehensive and subtle analysis of the aforementioned factors that debase the concept of Rizal in the modern Filipino eye. Why was this character significant? How should one perceive this idea?

Almario deals with the stereotyping of characters, whether Rizal meant for them to be seen as such, or whether they had been twisted around by succeeding versions of the Noli and Fili. In regard to Simoun, the protagonist/anti-hero of El Filibusterismo, he identifies the character’s similarities and differences to that of a more famous anti-hero: Alexandre Dumas’s Edmond Dantes, from the Count of Monte Cristo. As for Maria Clara, he tackles the question of whether the eternal symbol of perfect Filipina qualities, of beauty personified, is all that she seems to be, or whether she is a farce created to mislead, as well as whether the idolization she receives is  a good or bad thing.

In today’s school curriculum, people often question the importance of the study of Rizal, considering it just another weight to bear in the cross of education. This book should serve to refute any claims of insignificance.