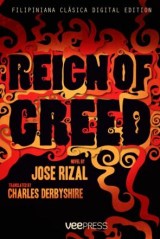 The sequel to Noli Me Tangere with its unarguably utopian vision, El Filibusterismo offers a much bleaker picture of the last decades of the nineteenth century. Crisostomo Ibarra, the reformist hero of the earlier novel, has come back to the Philippines as the enigmatic stranger named Simoun, a rich jeweller. Driven by hatred and a fierce desire to avenge his sufferings, and to rescue Maria Clara from the nunnery where she has fled, Simoun embarks on a crusade the goal of which is to corrupt and thus weaken various institutions that would eventually lead to a bloody revolution. He schemes and plans systematically and plots with various characters, including Basilio, to bring about the downfall of the government. The first plot fails, as does the second one. Simoun, carrying his huge stash of jewelry, flees to the mountain retreat of Padre Florentino, who absolves the dying man from his sins. The novel ends as the priest throws Simoun’s treasures into the sea with the hope that they could be retrieved and used only for the good of the people.